To many, a helmet is just a piece of equipment, the thing that protects your head. However, there is a cottage industry of artisans that use brain buckets as the raw material to create works of fine art. They’re are spherical canvasses that just-so-happen to double as safety equipment.

Custom painted helmets can take upwards of 40 hours for disassembly, design, paint and reassembly before seeing action on track. They are incredible labors of love created by craftsmen around the globe. In this second edition of our global list, we’ve highlighted twenty of the best and their most stunning designs ranging from amateur karting through Formula 1.

Note: Racing is dangerous (and addictive). Buy the best helmet you can afford. Then decide whether you can afford to have it painted. (We buy our helmets and safety gear from Winding Road Racing. They are racers offering racers great deals on Arai, Bell, Black Armor, Simpson, Sparco and Stilo.)

MotorsportReg founder Brian Ghidinelli chose BKD to paint his helmet (top left) because, “Brett’s sharp lines, contrasting finishes and detail work stand out. I began to consistently recognize his logo on helmets that I admired. It came out even better than I hoped – I had two people stop me at Circuit of the Americas just to snap a photo for Instagram.”

Arai also produces a limited edition Signet-Q helmet designed by King. He has expanded to vehicle liveries and clothing that reflects his #refineyouridentity style. His instagram is truly drool-worthy.

Hailing from Ireland, Baldwin has a firm presence across in the UK and Middle East with helmets for karting, rally and GT racing. He counts the Citroen WRC team and European Le Mans Series champ Matt Griffin as customers. In addition to helmets, Baldwin provides livery design and custom airbrush and paint work for vehicles and bicycles.

Stefan Di Resta is the brother of DTM and Formula 1 racer Paul Di Resta but is also a racer himself. In addition to helmets for his brother, Di Resta has also produced helmets for Le Mans winner Harry Tincknell and European and World karting champion George Russell. He’s in a battle with Brett King for best hashtag representing his work with #yourfastestidentity.

What is there to say about Troy Lee that hasn’t already been said? While he came from a motorcycle background, his helmets have become an empire and can be found in all forms of racing. Notable motorcycle racers wearing custom Troy Lee helmets include Jeremy McGrath, Ryan Villopoto, Wayne Gardner, Tommy Hayden and Roger Lee Hayden.

Based in Southern California, Alives started more than 10 years ago and counts Bryan Herta, Simon Pagenaud, Kenton Koch and Craig Stanton as customers. His helmets cover a wide range of style making him able to meet the needs of a variety of customers in different categories.

Our first international painter, Bignon began painting helmets 20 years ago in 1996 making him one of the most experienced painters on our list. He counts Formula 1 / IndyCar driver Sebastien Bourdais, GT pilot Alex Prémat and Sahara Force India test driver Esteban Ocon as customers at the top level of motorsport. He has been a prolific painter and his gallery is full of incredible helmets.

With an emphasis equally away from the road course, Savage designs helmets for “dirt, street or super speedways”. In forums we found his customers rabidly promoting his work which is always a good sign. Racers include IndyCar rookie Conor Daly and sports car pilots Guy Cosmo and João Barbosa.

Working from the center of the racing universe, Corby has been painting for 25 years beginning with his own karting helmet. He produced an annual specialty helmet for Buddy Rice and the Indy 500. When Rice won the race in 2004, Red Bull commissioned him to paint 50 replica helmets; one of which was sent to President George W. Bush.

The lone Kiwi in the list, Richardson also started by painting his own karting helmet. After painting helmets for many friends, he opened Helmart Designs more than 10 years ago. Helmart helmets can be found protecting Formula 1 / Formula E racer Sebastien Buemi, Mercedes DTM racer Gary Paffett and 2015 WEC Champion Brendon Hartley. He has a great instagram feed with incredible detail photos of his helmets.

Cennarusa, or CenSport as people simply refer to him online, has worked with a long list of professional and amateur racers. His name comes up frequently in helmet painter recommendation threads and he has seemingly worked with half of the American sports car racing grid including drivers Tommy Milner, Mike Skeen, Bryan Sellers and Dane Cameron. CenSport’s instagram feed also features 360° videos of recent helmets.

Founded by Alex Paglia, Axcel is a team of talented painters in Southern California. Their professional racers include Townsend Bell, Scott Dixon and Alexander Rossi. Axcel has also supported young racer Bruno Carniero since 2004. Carnerio has made a name for himself by funding his racing with door-to-door sales of Rodizio Grill gift certificates and recently wore his Axcel helmet at Zhuhai for a round of the FIA Chinese F4 Championship.

From Canada come the beautiful helmets of Patrice Harvey. There is definitely some maple leaf pride in Harvey’s work for Canadian racers Michael Valiante and Robert Wickens but his work is equally great for DTM driver Bruno Spengler. He notes in his Instagram that with the drop in the value of the Canadian dollar, Americans receive a ~25% discount on his pricing!

We became aware of JMD through our obsession with Sebastien Vettel’s helmets. While Vettel doesn’t use a new helmet at every race according to Munser, he does retire any helmet in which he wins and so Munser has delivered more than 100 helmets to the four-time Formula 1 champion. This Vettel gallery includes some of our all-time favorite lids by any painter anywhere.

But Munser’s customer list doesn’t stop there! In F1 alone, he has designed helmets for 24 drivers including Michael Schumacher, Fernando Alonso, Mark Webber, Nico Rosberg, Felipe Massa and Nico Hulkenberg making him one of the most recognizable painters in the game.

Stumpff got his start painting in high school for late model and sprint car drivers. Now located in the heart of NASCAR country, it’s no surprise that Stumpff has delivered helmets to Cup drivers Mark Martin, David Ragan and Ryan Truex. But with a style different from many of the painters on our list, he’s also produced airbrush masterpieces to Monster Jam Grave Digger driver Dennis Anderson.

Another painter with a lot of NASCAR presence, Young has painted helmets for Kyle Larson and Denny Hamlin plus sports car racers Eric Curran and Tom Long. His helmet also went to the drag strip to protect Donny “Hollywood” Urban on his way to the IHRA World Championship.

TJ’s first introduction to racing was at a Wisconsin kart track that led to his own racing exploits around the United States. Painting helmets married his enthusiasm for design and racing and he’s produced eye-catching designs for up-and-coming Mazda Road to Indy racer Aaron Telitz and Continental Tire series champion Trent Hindman. He doesn’t have as many big names in his gallery but the helmets are consistently awesome.

Chris Wood founded AirTrix after serving in the U.S. Marines in 1994. After an introduction to Ben and Eric Bostrom, AirTrix helmets quickly found their way onto the heads of competitors everywhere including sports car racers Ryan Dalziel, Patrick Dempsey and Alex Gurney plus a deal producing helmets for Red Bull.

Since 2000, Geert has been producing helmets from the Netherlands reaching the highest levels of the sport with racers such as Oliver Jarvis, Nelson Piquet, Jr. and Christijan Albers. He has a huge variety of styles in his gallery. Fun fact, Geert worked at B.A.R. Honda before opening his own paint shop!

Named as a glaring omission by many of the artists we included in the first edition of this list, JLF Designs has a style that often combines the graphic design-oriented look and airbrushing creating very unique pieces. Fowler’s work can be seen worldwide on the heads of racers such as Alex Lynn in Formula E, Factory Bentley GT racer Guy Smith, World Touring Car Championship driver Rob Huff and former Formula 1 and current IndyCar competitor Max Chilton.

There you have it – our list of 16 20 incredible helmet painters around the globe. If you’re like us, you just wasted an entire work day drooling over the galleries. These pieces of functional art don’t come cheap – the cost can easily exceed the original price of the helmet and sometimes by a factor of 2 or 3 – but for many racers the opportunity to have a unique representation when they hit the track is priceless.

Who’s your favorite? Who did we miss? The ultimate guide to heel-and-toe shifting on track 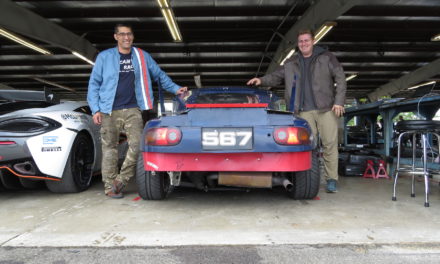 Testing Miata aerodynamics with $20K worth of computers 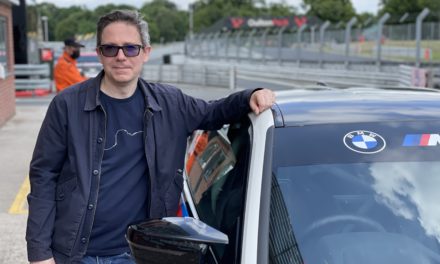