It was pure coincidence that Bruton Smith mentioned that he would like to have a roller-skating elephant perform on the front straight of Charlotte Motor Speedway, and that I had recently done a story on Bobby Moore, an animal trainer who taught an elephant to roller skate. I put Bruton in touch with Moore. Though nothing ever came of it, the exchange gives you an idea of what kind of promoter O. Bruton Smith was. No idea too big or too small. Or too strange.

Last week, Bruton passed away of natural causes. As his acquaintances might expect, his funeral this Thursday will be live-streamed on YouTube.

Ollen Bruton Smith was born on March 2, 1927, the youngest of nine children, and grew up on a farm in North Carolina. At an early age, Bruton decided he liked money, and spent the rest of his life accumulating—and spending—it. As the head of Speedway Motorsports, his company owns the Charlotte Motor Speedway, as well as a majority of NASCAR’s other battlegrounds: Atlanta, Las Vegas, Sonoma Bristol, New Hampshire, Texas, Dover, and Nashville. Many NASCAR fans aren’t aware that Bruton founded Sonic Automotive, one of the nation’s largest retailers with 160 locations in 23 states. The company made $12.4 billion in total revenue in 2021, selling 103,000 new vehicles and 183,000 used ones.

Much of Bruton’s time was spent worrying about his racetracks, and how to make them bigger and better. Mostly bigger. “Bruton wanted more, more, more, bigger, bigger, bigger,” wrote Humpy Wheeler in his autobiography, Growing Up NASCAR. According to Wheeler, Bruton was “absolutely the most aggressive human being I have ever known or could imagine.”

For years, Humpy Wheeler served as the president of Bruton’s Charlotte Motor Speedway. The debate over which gentleman was the better, more bombastic promoter will likely carry on for even longer. My money is on Wheeler, but we must consider that Bruton had to sign-off on his president’s wild antics, first. Bruton gave him permission to book Elizabeth Taylor as the trophy woman and kiss the race winner in victory lane. He okayed The Great Taxicab Race, too. Taxi drivers drove cabs around the infield stopping at a fake hotel on the front straight dropping off a fare, and on the back straight to pay a toll at a fake toll booth. Within a few laps the aggressive drivers destroyed the toll booth, and then the fake hotel. Fans loved it. The duo of Bruton and Humpy were unstoppable.

Still, Bruton was difficult to work for. “If I wanted a 40-foot sign for the Speedway,” Wheeler wrote, “he wanted a hundred-foot sign. I’d say, ‘It violates the sign ordinance.’ He’d reply, ‘Get the ordinance changed.’” Bruton had the ability to move mountains, literally. In the mid-Aught’s, he set out to build a dragway in Charlotte, across the street from his oval. Because two wasn’t enough, Bruton decided he was going to build a four-lane strip. Four Top Fuel cars running at once—what a sight!

The residential community around Charlotte Motor Speedway had grown accustomed to the moderately muffled sounds that come from an enclosed oval track. Not so with drag races–top fuel cars can be heard from five miles away. He began construction without waiting for pesky details, such as proper building permits. Charlotte’s Cabarrus County eventually put its foot down: No drag strip.

Bruton posed a solution. He would essentially place a forklift under the Charlotte Motor Speedway and move it to a more appreciative county in North or South Carolina. Plenty of counties raised their hands.

It was outrageous. It was impossible. But every Cabarrus County official knew that if anyone was crazy enough to do it, it was O. Bruton Smith. By 2008, a four-lane drag strip was completed across the street from Charlotte Motor Speedway. I admired Bruton’s ability to manipulate the media. One personal favorite was the time he gave an interview to a Charlotte television station, saying that he just might move the fall NASCAR race from Charlotte to Las Vegas (where he also built a four-lane drag strip) because taxes had doubled in Cabarrus County. The news station ran the story.

Then, he issued a press release slamming the story for publicizing what he told them to run. “The ‘done deal’ report by WBTV regarding moving the race date is false.” Though, in the station’s defense, they never said it was a “done deal.”

Bruton backpedaled later in the press release: “It’s frustrating to think about the future and consider that the local government doesn’t share the same excitement about Charlotte Motor Speedway that our fans do. The Cabarrus County politicians may say nice things to the media, but raising our taxes does not support the tourism business, the area economy or companies trying to grow.”

The takeaway: I’m going to move the race to Vegas, if you don’t cut my taxes.

And he was just crazy enough to do it. Bruton had been ill since his NASCAR Hall of Fame introduction, in 2016, and his son Marcus Smith ran the race tracks in his absence. He has been the president of Speedway Motorsports since 2008. A much kinder, gentler man than his father, Marcus has proven his ability to guide the company using a velvet hammer instead of an iron fist. The younger Smith has already had an impact on the industry, retooling a road course in the infield of the family’s legacy track in Charlotte and covering Bristol Motor Speedway in dirt, all to attract fans to the company’s speed palaces.

Bruton Smith was 95. His funeral is at 1 p.m. on Thursday, June 30. You can watch on the Charlotte Motor Speedway’s YouTube channel. Roller-skating elephants are unlikely, but with Bruton, you never know. 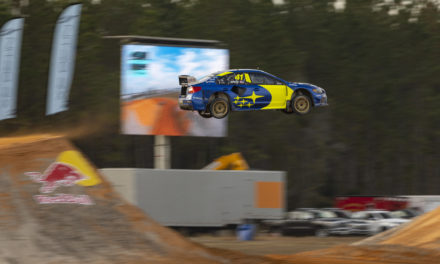