On a weekend that saw A-listers pose in the pitlane at Monaco and a quarter-million race fans flock to the Brickyard, a somewhat smaller, more intimate sporting event took place in England’s Malvern Hills. This green and pleasant landscape hosted the first (of many we hope) Hagerty Hillclimb at the world’s oldest surviving racing venue, Shelsley Walsh. Since 1905 drivers have been testing their mettle, and metal, on the same narrow, twisty ascent that rises 328 feet in 1000 yards, and now it was the turn of Hagerty members. If it weren’t for the Hagerty flags directing you in to this historic site it would be easy to miss. The entry looks much like any farm in this part of Worcestershire and, once through the gates, the barn-like buildings only confirm the agricultural aesthetic. The pit garages are little more than timber and tin-roof structures, the official buildings, wooden sheds. It’s all very quaint. Yet motorsports is taken seriously here. The course record is an astonishing 22.37 seconds, achieved by Sean Gould in a purpose-built, Judd V-8-powered single seater special. It’s a feat that seems all the more incredible after 15-minutes of huffing, puffing, and hiking takes you to the top of the hill where Gould crossed the finish at over 150 mph.

Today the pace is somewhat slower as almost 200 Hagerty members have exclusive access to the hill and the competition is friendly. Everyone is here to enjoy their cars at this special venue, and the rate of progress up the course is as eclectic as the collection of cars in the paddock. One moment there’s an ex-works Audi ur Quattro leaving the line, the next it’s an Aston Martin DB4 GT, a Blower Bentley or a Porsche 911 RSR. You’re just as likely to spy a Subaru 22B as a Lister Jaguar or a Mini, a Lotus Exige or a Lotus Carlton—and for several drivers Miata is the answer. What’s perhaps even more impressive than the fact these cars are hurtling up the hill is that almost every one of them has been driven here by its owner, whether that’s the only road-legal Toyota 2000GT in the U.K. or the lime green Lamborghini Miura that accompanied it.

What’s clear is that everybody here is a driver first and foremost. No matter if they’re behind the wheel of something worth millions or a home-brew project, the shared passion is obvious. We’re sure that you, Hagerty reader, also share this love of cars and driving, so we’ll leave you to enjoy this glorious gallery from a glorious day. The course is short but steep as the driver of this Alpine is about to discover. Eliot Dunmore in his Subaru Impreza 22B 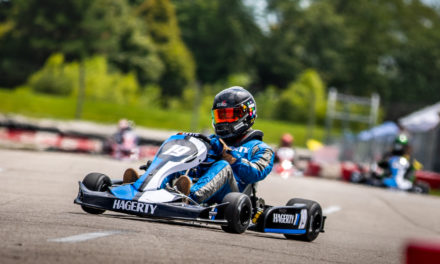