“I really screwed up. When you start a project like this,” says Mike McNamee, motioning to his 1985 Buick Somerset road racer, “you need to add up how much it’s going to cost you, and then multiply that by your age.”

We stood trackside at the Rolex Monterey Motorsports Reunion, as the club racer confessed, jokingly, to his miscalculations when he purchased his prized Buick exactly 30 years ago. A digital analyst by trade, McNamee used tech and teachings to resuscitate the retro ride. Now, years after its sole win in the Trans-Am series, the 500-horsepower Buick is still clipping curbs and burning straights at vintage races throughout the West Coast.

Inspired by the relatively cheap price tag, McNamee bought the car as a basket case, a pile of metal and fiberglass with detached front and rear clips. Shocking, if you consider that just three years prior to its disheveled state, the car was cresting the high banks of Daytona in the 1989 Rolex 24. At that point, though, the endurance racer’s day on the grid were numbered.

Designed by Ron Nash, the tube-built chassis had already served its best years at the hands of Elliott Forbes-Robinson. The Canadian hot shoe delivered many strong runs with the wide-body Somerset, including a win at Sonoma Raceway in California, circa 1985. This victory marked the only time a Buick ever won in the long-running Trans-Am Series. Despite its success, by 1986, the winning chassis was relegated to backup car duty. It ran just once, at the Detroit Grand Prix, ultimately failing to finish after a broken header filled the cockpit with exhaust fumes. After the ’86 season the car and two other Buicks were sold to Gordon Oftedahl, who took this particular chassis to Daytona with a V-8 under the hood rather than the Indy-proven Buick V-6 block.

Enter Mike McNamee. It was 1992 and the avid club racer was growing tired of his Porsche 914. “I’m a technical guy, so one day I used a program to analyze the suspension,” he says. “It was all jacked-up.” Instead, he started searching for a purpose-built racer; something with a tube frame. The retired Buick was the answer.

When McNamee stepped in to bring the car back to life, he went directly to the original designer for input in the reassembly process. Using Nash’s guidance and stacks of period photos, he embarked on a rather meticulous rebuild. Up until that point, he had considered himself a decent wrench. The Buick, however, would serve up a bevy of new challenges. For a car this obscure, McNamee had to fabricate everything by himself, which included learning how to bend tubing and weld aluminum. “It’s never been to another shop,” he says, proudly. Once the Buick was returned to its former glory—which included the 4.5-liter V6, Weismann five-speed, and the 1985 livery—McNamee had to figure out how to tune the beast.

One of the biggest hurdles was dialing in the sway bar setup. Initially, he had a big bar up front and a lighter one out back. Despite his best efforts, he couldn’t get the car to turn, so the tech guy purchased Performance Trends suspension analyzing software. “You plug in your sprint rates, all this crap, and then click ‘optimize,’” he says. The program suggested lightening the front bar and removing the rear altogether. Lo and behold, that was exactly how Nash set up the suspension back in the day.

“It’s quite easy to drive,” he says of the car which bears a striking resemblance to the Buicks driven to NASCAR championships. “At 2500 pounds, it doesn’t feel like a stock car.” Back in the day, Trans-Am utilized a formula to determine a vehicle’s mandatory weight by factoring the engine’s displacement. Since the Buick utilized two fewer cylinders than its competing Ford or Chevy V-8s, the Buick was permitted to run light.

On track at WeatherTech Raceway Laguna Seca, he spent the weekend dicing with Mustangs, Capris, Camaros, and Corvettes. According to its proud owner, the car’s strengths are under braking and through some of the corners. “I get killed down the straights.”

Still, the finishing position isn’t important to McNamee. “When I surfed or rode dirt bikes, it wasn’t about the boards or the bikes, it was about hanging with your buddies,” says the SoCal native. “It’s the same thing at the Reunion.” Besides, the unique Buick garners plenty of fanfare in the paddock, with spectators walking past the 1985 Trans-Am championship-winning car—a pristine white third-gen Firebird—and up to the Somerset’s slotted grille. If anything, that makes the painstaking restoration worth it. 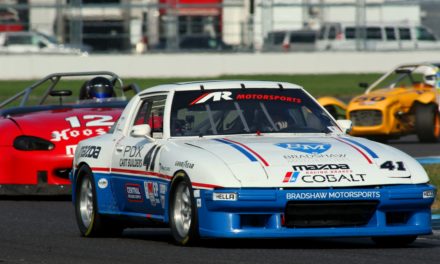