When my Suzuki SV650 race bike rolled into my garage, the belly pan required at least three different wrenches to remove. That pan is an important piece, and I don’t want it to fly off willy-nilly, but there had to be an easier way to attached it. It took two seconds of looking for that better way before I settled on a trio of Dzus (pronounced Zeus) fasteners. Are you familiar with them? Even if you are, you probably don’t know the full story.

The name comes from the man, naturally, and the story starts in the early 1930s. William Dzus needed to hold things together, so he created a simple quarter-turn design that not only locked things securely together but quickly, simply, and with captive hardware. The design is a retained cam stud that locks onto a wire spring attached to the opposite part. Just a flick of the wrist and the attachment is loose, yet all the force in the world can’t break it apart unintentionally. The patent soon followed. He rolled right into producing this new fastener in his West Islip, New York, garage and targeted the burgeoning aircraft industry. Only four years passed between Dzus’s intial idea and the incorporation of Dzus Fastener Co., Inc., in 1936. By 1939 the company had grown to the point that a plant was added in England. World War II soon set in, and the orders nearly overwhelmed the Dzus Fastener Co. The spiral cam locking fastener produced by Dzus became standard equipment on all Allied aircraft and made it so that all production was focused on the war effort. Only after the war concluded was the program renewed to market this fastener outside of the aircraft space.

And for good reason. I’m not alone in my need for durable and easy-to-use fasteners that allow for quick servicing. Early hot rodders notoriously pulled from experiences maintaining planes and other military machinery, so it was only a matter of time until the Dzus fastener appeared on the engine-swapped jalopies and salt flat racers. The beautiful part of the Dzus design was that the spring tension holds the whole operation together, and thus vibration often helps keep it all together rather than shaking it apart—and all with no threads to cross or otherwise booger up. Once installed and locked the whole operation is nice and aerodynamic. Here you can see how the quarter-turn cam engaged the spring and how that tension will not let the cam come undone.

Interestingly, for as simple as the design is to operate it can be a bit of a pain to install. To get the final product working properly requires drilling no fewer than six holes in precision location relative to each other. Four pop-rivets keep the spring and spiral cam retained to their respective panels. There is also the business of the spring height, which needs to be correct for the panel thickness being secured or the operator will struggle to lock and unlock the cam. Luckily that alignment and fabrication process only has to be done once.

For my SV650, that meant drilling a few holes in the fiberglass belly pan and bending up three stanchions of aluminum that would suspend the pan below the engine at a safe distance from the exhaust that runs underneath the engine. The catch pan is required for track riding, just in case a connecting rod lets loose and punches a hole in the crankcase. With a catastrophic failure like that it is important to keep the oil with the bike and not on the track surface. Mine is fairly unobtrusive, but it still needs to be removed to inspect things between rounds at the track and, of course, for maintenance like oil changes or shock adjustments. These simple aluminum pieces keep the belly pan in place.

I roll off to the track with a little more confidence thanks to these three hardworking and simple fasteners. Not only do I know my belly pan is properly retained and won’t come loose, I also know that I can have it off in an instant if the need arises. All thanks to a 90-year-old design that has gone relatively unchanged for its entire production run. Now that’s what I call staying power. 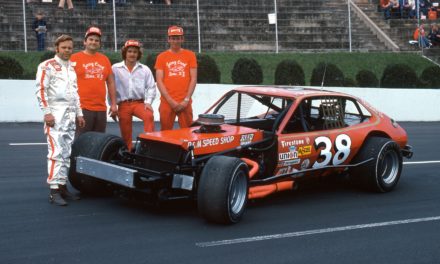